Taekwondo is a modern Korean Martial Art that has an interesting history which spans several thousands of years. It has been practiced as a sport and as a martial art to improve a persons physical fitness and mental health. In the Korean language “Tae” means to jump or kick with the foot; Kwon means to punch or strike with the hand or fist; Do means “a philosophical way or ways of life.” In English this translates as “the way of the fist and foot fighting.”

The basic skills of blocking, punching, and kicking are combined into three main functions. Free sparring, breaking techniques, and forms or Poomsae coordinate a series of basic movements requiring concentration and focus.

In May 1973, the World Tae Kwon Do Association was organized to promote Taekwondo on an international level. Thereafter the building of Kukkiwon began. It is considered the Institute for a National Sport and became the center of Taekwondo around the world. It is the main educational and training center for the Korea Taekwondo Association.

Taekwondo has been internationally recognized as a method of promoting physical fitness, a sport, and an extremely effective method of self defense. Taekwondo was elevated to that of an Olympic sport by the International Olympic Committee in 1980 and included as a demonstration sport in Seoul 1988 Olympic Games.

The history of Taekwondo proves to be far more than self defense. Taekwondo develops balance, speed, agility, strength and rhythm, it offers both physical and mental challenges. Regular practice of taekwondo encourages self discipline and self control. It provides a setting for a feeling of emotional well being, free from stress and fear. Taekwondo sparring teaches trust in one’s instructors and fellow students. Taekwondo develops self confidence and respect. When you are combining all these different aspects Taekwondo emerges as a truly unique approach to living, and a developer of future leaders in communities

Today, athletes compete in an 8m diameter octagonal shape. Athletes still wear the Dobok, the traditional white uniform, with protective equipment that is coloured for easy differentiation. Additionally, they must have a trunk protector, head protector and a groin guard that is worn under the Dobok. The taekwondoin must also be equipped with forearm and shin guards, gloves, sensing socks, and a mouth guard before entering the competition area.

We are Saskatchewan's governing body, dedicated to the advancement of the World Taekwondo style of this popular Korean martial art.

A rich history of craft and tradition, in Saskatchewan, led by two main figures*.

Sung Ju Kim trained as a tae kwon do athlete in his native Korea, and earned his sixth degree black belt before immigrating to Canada in 1973. On October 1, 1973, he opened the first World Tae Kwon Do Federation (WTF) Tae Kwon Do Academy in the province of Saskatchewan, Kim`s Tae Kwon Do Academy, Regina.

Beginning in 1979, Sung Ju Kim was the head of Team Saskatchewan at many national team trials, and was the Canadian team manager at the 1989 WTF World Championships. Kim served on the board of directors of WTF Canada and is certified as an international referee and judge. In 1993, Grand Master Sung Ju Kim was elevated to the rank of 9th degree black belt, making him the first Canadian to reach this level. 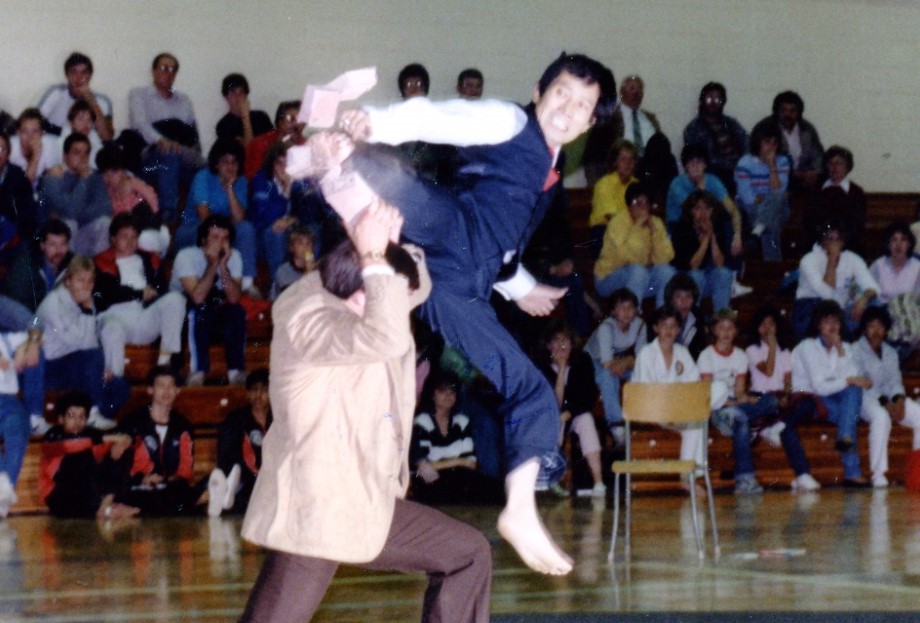 Grandmaster Kee Ha has been one of the driving forces behind taekwondo in Saskatchewan for nearly 35 years.

After beginning his training in Korea in the late 1950s, Ha opened Saskatchewan’s first World Taekwondo Federation (WTF) school in Regina in 1973, followed by a school in Saskatoon three years later. Pursuing his dream to teach the values and spirit of the martial art to people with a desire to learn, he began to mentor and train students and instructors in the sport and art of taekwondo. In 1998 he tested and passed his 9th Dan Black Belt.

Beginning in the early 1980s, Ha mentored, monitored and promoted more than a dozen taekwondo schools around the province. In addition to being a founding member of the Saskatchewan WTF Taekwondo Association Inc. in 1981 and the Saskatoon WTF Taekwondo Association in 1987, he served as an executive member or special advisor with these groups and others in Saskatchewan. Ha also organized and hosted the first Grand Master’s Cup Championships in 1989, which are still held on an annual basis.

On the national level, he produced more than 20 national champions from 1985 to 2006, and served as vice president of the WTF Taekwondo Association of Canada from 1986-88. In addition, Ha helped host the national taekwondo championships and junior national championships in 1987 and 2006, respectively – the only time Saskatchewan has hosted these events. He has also been involved as a member of Team Canada in various capacities at several international competitions.

*Used with permission from the saskatchewan sports hall of fame.

We would like to recognize our supporters and affiliates